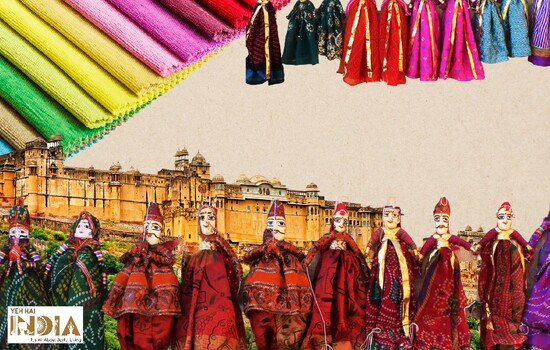 Kathputlis of Rajasthan play an important role in defining the folk heritage of the royal state.

Rajasthani Kathputlis are colorful-appearing wooden puppets with a history that dates back to the reign of the Royals. These traditional dolls or puppets are renowned locally, nationally, and internationally for its singular beauty in shape, attire, and theme.

The importance of Kathputlis is defined by the puppet, the puppeteer, and the creator of the puppets. Since the earlier times, children and adults have both found amusement in puppet shows.

Puppets and puppet shows have a definite heritage and cultural flavour in the Indian environment. The Indian puppets known as ‘Kathputlis’, which are made in the state of Rajasthan, are well known throughout the world.

The term ‘Kathputli’ is a combination of two slang words. Putli means ‘doll’ and Kath means ‘wood’ and they both work to define wooden dolls.

History of Kathputlis of Rajasthan

Rajasthan’s social life has always depended heavily on Kathputlis. There are some Rajasthani folk songs, ballads, and folk stories that make mention of kathputlis.

Scholars and historians have located the origin of these puppets as the indigenous Bhat community of Rajasthan, about 1500 years ago.

The puppeteers from the Bhat community are responsible for giving Kathputlis their distinctive flavour. Due to its accurate depiction of tradition, Kathputlis still maintain its status as an important component of India’s cultural heritage.

The Kathputli tradition is built on folklore and folktales. Folklore tells the stories of the old tribal people, including their way of life, customs, and beliefs.

The Kathputlis’ genuine traditional flavour was derived from the inspiration of the tribal people’s tireless efforts to preserve their art.

It is thought that the modern-day Nagaur and its surroundings are where the Kathputli art first appeared. The Bhat people formerly led a nomadic lifestyle.

They would travel to different places and host Kathputli performances for Rajasthan’s royal and aristocratic families during the dry season.

In order to cultivate the crops, they later returned to their village during the wet season. The Bhat community received numerous favours from the Royals and Nobles.

In exchange for chanting their praises and arranging events in their honour, these benefactors looked after the artists.

The Bhat community was only able to establish their art because of the support of the lords and the real curiosity of the locals in attending their performances. It is also one of the explanations for why this form of art continues to endure.

Themes Of A Kathputli Show

Kathputli performances frequently feature themes regarding aristocrats because they are popular with the Royals and Nobles and form an important part of Rajasthan’s formidable culture. The tremendous exploits of the monarchs and their forebearers are epic themes.

Some of the pieces even contained admiration for the current royals of the time; they had an illustrious feel. The topics of tribal tradition and way of life are also present in the performances.

Characters like snake charmers, peasants, and other relevant everyday characters make these shows popular with regular people as well. The audiences also like hearing about everyday events in rural areas.

The puppeteers of the Bhat community, known as “Kathputliwaalas“, were workers in agriculture. Across all social strata, people showed a sincere interest in their artistic depictions of the battle to survive. There are still Kathputli performances nowadays.

The wooden structure of the doll is meticulously processed. Extra care is taken to carve out features such as the eyes, nose, and mouth. The Kathputlis usually have large eyes and noses that set them apart.

Hands are used to carve the eyes and nose of the puppets. They must also ensure that the surface is smooth before painting the details on it. If the doll is male, a large black moustache is drawn to complete the traditional look.

The dolls wear colourful dresses to represent the colourful culture of Rajasthan. Aside from the gender-specific attire, a lehenga and bandhani for women and a dhoti for men, all of the dolls are dressed in bright colours.

The dolls, dressed in vibrant red, yellow, orange, blue, and other colour easily catch your eye from a distance and are a regular feature of fairs and festivals of Rajasthan.

There are certain accessories that the dolls always wear with traditional Rajasthani attire. A dupatta, heavy jewellery, and large bangles are common for women, while a colourful Rajasthani pagdi turban and traditional footwear called mojaris, are required for men.

The Kathputlis are given the appropriate accessories based on their gender. An accompanying horse and pungi, a wind instrument used by Rajasthani snake charmers, is attached to the figure depending on the character the doll plays.

The doll riding a horse is considered to be the warrior while the one carrying pungi depicts the role of a snake charmer.

Without traditional music, a folktale would be incomplete. Hence, the Kathputli performances honour the patrons of the artisans and musicians belonging to tribal groups. During the performances, Rajasthani traditional music and instruments are frequently used as an accompaniment.

The songs are sung aloud by the puppeteers, and the music’s upbeat pace is provided by the supporting performers. The performances are accompanied by two simple but distinctive instruments: a dholak and a bamboo instrument that resembles a reed.

The Kathputli concerts represent the legacy of culture and tradition in modern times. The performances used to be a mandatory component of any social event. It is now a component of a local tour of Rajasthan.

These dolls are still made today by artisans who are descended from the original Kathputliwaala community. As a memento of Rajasthani culture, visitors who travel to Rajasthan frequently bring home a pair of male and female Kathputli.

The dolls serve as more than just props for live performances; they are also decorative items for homes. The performances are still a regular part of life in the cities of Jodhpur and Udaipur, where the dolls are created in large quantities.

Kathputli shows, like the Rajasthani Ghoomar dance, are an important part of the traditional culture of the state, despite the passage of time and the rise of other types of art.

The Rajasthani Kathputlis are well-known throughout the world for their rustic characteristics and have played a significant part in preserving Rajasthani culture.

When in Rajasthan, do take time to attend a Kathputli show to know the facts about Rajasthani way of living.

Also Read – Rajasthani Kalbeliya Dance: The Origin & Everything Else You Want To Know