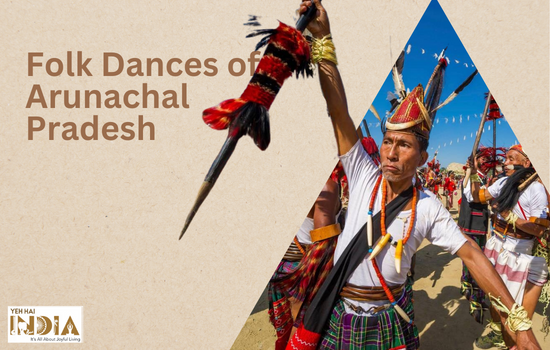 “The Land of the rising sun” is best known for its vivid folk culture practiced within the remotest parts of this pristine state.

Folk dances are an integral part of the culture of India, representing the country’s rich and diverse history.

These dances are often performed in traditional clothing by a group of people belonging to a community and feature a variety of signature steps, unique hand gestures, and their own music.

The dances are often performed during festivals, weddings, and other special occasions to celebrate the music and culture of the region.

These dances remain an integral part of the cultural heritage of India, providing an important link to the past while also providing an opportunity to bond with one another and celebrate the joy of living.

Arunachal Pradesh, located in the northeastern part of the country, has many different tribal communities that practice their own unique traditions and dances.

Folk dances of Arunachal Pradesh reflect the vibrant culture of the region and are performed in local celebrations and festivals.

The dances range from traditional Bardo dance, which is performed to invoke the gods and goddesses, to modern War Dance, which is used to celebrate victories in war.

Each dance is unique and has its own story and meaning, making them an important part of the cultural identity of Arunachal Pradesh.

Let’s dive deep into the colourful folk dances of Arunachal Pradesh to learn more about tribal folk culture prevailing in the state.

Regional Communities and Their Folk Dances:

Tawang’s Monpa tribe practises this old religious dance-drama style folk dance. This dance has 5 characters, two of which are female characters, the Lhum and Lhamu.

The protagonist is Nyapa and the rival character is called the Nyao. This dance is popularly performed during the Losar festival in Arunachal Pradesh.

This is a traditional dance from the Nocte tribe of Arunachal Pradesh. It is performed during the Chalo Loku festival which happens in the months of October and November of every year.

The festival is a celebration of the beginning of the paddy cultivation season. Both men and women dance in a circle and involve a lot of hopping and clapping. The men typically wear a dhoti-like costume and silver or bamboo jewellery on their bare chests.

Women wear their traditional attire including a feather headdress along with a blouse and cotton skirt. The women also adorn metallic rings on their fingers, earpieces made of feathers, anklets, etc.

The tribe of Adi perform different dance forms during different celebrations. One of them is the Pasi Kongki. The tribe performs this dance to a special song called Aabang which narrates the story of the social work done by the Pasi.

The dance depicts all the hardships faced by the Pasi on their journey across the hills from where they procured iron to cast knives and other things.

Ponung Dance is performed by young girls and women from the Adi tribe along with a single man. This man is called the Miri who sings from the centre of the circle of women.

The women hold hands and dance along to the tune sung by the Miri. This dance is performed as a prayer before a harvest.

The song is sung along with an instrument called the Yoksha, shaped like a sword. It creates a rattling sound that gives rhythm to the dancers’ performance.

Popir is the folk dance of the Galo tribe of Arunachal Pradesh. They perform this dance at all their celebrations to share their joy and to form a sense of community.

This dance is also performed as a prayer to the Goddess Mopin Ape who symbolises fertility and prosperity.

The Buiya dance is a lively and energetic dance that is performed by both men and women of Digaru Mishmi tribe. This dance is reserved for special occasions to add colour and meaning to festivals and celebrations.

The dancers wear traditional attire, including headdresses made of feathers, and they are accompanied by music played on bamboo flutes and drums.

The dance is performed in a circular formation with the dancers moving in a clockwise direction. The dance steps are simple, and the dancers use a lot of hand and body movements to express the joy and happiness of the occasion.

Oriah is a popular festival among the tribe of Wancho that happens during the months of March and April.

They perform this dance during this festival as a celebration of the turn of the season and to create a sense of oneness among their kin during good times.

The name Bardo Chham means the Dance of the Zodiacs. The tribe of Sherdukpens of Arunachal Pradesh have a belief that there are twelve evil being for the twelve months of a year.

This dance is performed to describe and tell stories of these evil beings depicted as different forms of animals.

Both men and women perform this special dance that portrays the difficulties humans face during their lifetime and how they overcome it leading to victory and happiness.

Arunachal Pradesh, situated in the northeastern part of India, is home to a variety of folk dance forms. These folk dances represent the region’s vibrant culture and the way of life of its people.

Some of the most popular folk dances of this state include Aji Lhamu, Chalo, Pasi Kongki, Ponung, Popir, Buiya, Wancho, Bardo Chham, etc. These dances are a representation of the state’s vibrant culture and its relationship to nature.

These vibrant and energetic dances, performed by both men and women, are steeped in symbolism and tell stories of martial valour, rituals, courtship, harvest and heroic deeds.

Believed to have a purifying effect on participants and the surrounding environment, these folk dances are part of the cultural expression of the people of Arunachal Pradesh and play an important role in preserving the long tradition of music, dance and art within the region.

Getting to witness the exotic dance forms not only brings to focus the cultural sensibilities of the locals but also lets you develop an understanding of tribal customs and traditions. 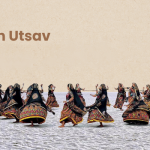