India has been home to many wonderful arts and dance forms since time immemorial. Its traditions and cultures are deeply intrinsic in its history and are as varied as the land itself. The artistic desire of Indian civilisation is often depicted in its dance forms which continue their relevance to date.

Mohini attam also spelled as mohiniyattam or mohiniyattam is one of the innumerable dance forms that are primarily associated with the traditions of south western India.

Performed in the honor of Lord  Vishnu, the dance is one of the most prominent cultures of India and is considered the greatest projection of feminine grace.

Here is everything you need to know about this dance, its history, and its significance.

Meaning and Significance of Mohiniyattam

Mohiniyattam interpreted as ‘the dance of Mohini’ gets its name from the historical enchantress avatar of Lord  Vishnu in Hindu mythology. In Malayalam, Mohini attam translates to the ‘dance of enchantresses.

In its mythological tale, Mohini is the avatar of Lord  Vishnu who helped in annihilating the evil ‘bhasmasura’ – a devout who gains powers through the grace of Lord  Shiva. Hence, the dance form is considered a feminine projection of greatness, beauty, and divinity that helps good prevail over evil.

Mohiniyattam is a classical dance form whose essence is filled with femininity and hence is performed mostly by women. It is traditionally a solo dance performed by women who undergo extensive training, sometimes for a lifetime.

Its repertoire includes music of Carnatic style, singing, and acting through the course of the performance, where the recitation may be either by a separate vocalist or by the dancer.

The music and songs involved in the dance are typically Malayalam-Sanskrit hybrid verses, often referred to as ‘Manipravalam’.

Mythology and History of Mohiniyattam

The story of mohiniyattam finds its origins in the Hindu mythological tale of Bhasmasura and his enmity with Lord Shiva. Bhasmasura is an ‘Asura’ who is an evil and cruel being but also a great devotee of Lord Shiva.

In his desire to acquire immortality, he performs a great penance against all odds for the appearance of Mahadeva i.e Lord Shiva. As a result of his penance for years, Mahadev becomes pleased and tells him to ask for a boon.

When asked for the wish of immortality, Shiva says it is against the laws of nature and hence, asks him to seek another wish. In his quest for seeking great powers, Bhasmasura wishes to acquire a power where anyone who is touched by his hand on the head, turns into ashes.

Shiva grants him the same book but Bhasmasura wishes to test the power by trying to put his hand on Lord Shiva. Realizing his mistake, Mahadeva runs for the help of Lord Vishnu, who takes the avatar of a beautiful woman, ‘Mohini’.

Mohini seduces Bhasmasura through her enchanting beauty. When Bhasmasura seeks to marry her, Mohini says that she would be willing to marry Bhasmasura if he can imitate her through a dance form, as it is only her passion for dance that can match her desire for a worthy partner.

Bhasmasura agrees to fulfill the wish of Mohini out of his desire to marry her and starts to copy move by move of her enchanting dance form. The dance is performed for days and days when ultimately, Mohini strikes a pose where her hand is placed on the top of her head.

When Bhasmasura imitates the same, he turns into ashes and ceases to exist.

Reference to this tale and its profound history can be traced to the texts of ‘Vyavahar Amala’ known to be scripted in 1709 by Mazhamagalam Narayanan and Ghoshayatra and later by the great poet, Kunjan Nambiar.

This dance form has then become an intrinsic culture of Kerala and was structured into the present-day classical format by the Travancore Kings in the 18th and 19th century C.E.

In the 19th century, the Perumaals, or the rulers of Tamil Nadu, ruled by the Cheras brought the culture of fine dancers who settled in temples. Their dances are known by different names to date such as ‘Dasi Attam’ corroborated in the epic ‘Cilappatikaram’ and names such as ‘Nangai Natakam’ and ‘Tevitichiyattam’ among others.

Though the earliest mentions were found in ‘Vyavaharamala’ of the 16th Century and it transcended to the 18th and 19th centuries, the dance form and systems associated with the ‘Devdasi’ were ridiculed as prostitution by the British Raj.

A series of laws were initiated in the 1930s that led to the downfall of this art. Renewed interest and socio-political protests ultimately led to the revival, and reconstruction of the dance by the people of Kerala, and these movements are particularly led by poets like Vallothol Nayana Menon.

After the repeal in the 1940s, Narayana Menon helped repeal the ban and the temple dancing in Kerala took momentum. It also helped the establishment of ‘Kerala Kalamandalam’- a dance school that encouraged Moni attam studies, training, and practice.

The dance took greater significance through its great performers such as Mukundaraja, Krishna Panicker, Thankamony, and gurus such as Kalamandalam Kalyanikutty Amma

Most of the compositions in Mohiniyattam in the modern-day include the repertoire composed by Swati Tirunal that emphasizes ‘Sahitya Bhava’ i.e literary context.

Hence, the dance is characterized by its graceful swaying body movements with no abrupt jerks or sudden leaps. It belongs to the lasya style of Natya Shastra that is tender, graceful, and feminine, and often depicts literary contexts.

The movements are emphasized by the glides, up and down movement on toes, and are largely based on the art of balancing, like the waves of the sea and the swaying of the palm trees.

More than the footwork, emphasis is given to hand gestures and Mukhabhinaya or the subtle facial expressions. Hence, Mohinayattam also lays great emphasis on acting. The dancer identifies herself with the character, and its sentiments and aligns them with the existing padas and varnas.

The hand gestures, 24 in number, are mainly adopted from ‘Hastha Lakshana Deepika’, a text followed by Kathakali. Some expressions are also borrowed from  Abhijnayadarpana and Balaramabharatam.

The gestures and expressions of the face are closer to natural (gramya) and realistic (lokadharmi). This attribute can be traced back to Vishnu’s deception through the art of seduction against Bhasmasura, revealing that the destruction of evil requires natural and realistic pursuits.

Costumes in Mohiniyattam include plain white or ivory cream traditional sari embroidered with bright gold-laced brocade, which is similar to the Kasavu saree.

The dancers often wear fitted choli (blouses), matching sari below the waist is a golden belt that tucks at the end of the sari.

The dance is sometimes also performed by male dancers but is still attributed to feminine qualities within a man. They typically wear a dhoti or muti. Like a woman, his ankles are also adorned with chilankas and the feet and fingers are coloured red with natural dyes.

Performers wear a Hindu Tikka or Gobi on their forehead and their eyes are often lined.

The vocals and music are often Carnatic and the lyrics are a mixture of Sanskrit, Malayalam, and Tamil and are attributed to Manipravalam.
Musical instruments include Mridangam, Madhalam, ldakka, flute, Veena, and Kuzhitalam(cymbals). The ragas are rendered into the sopana, the style of the steps and is slow and melodic. 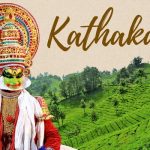 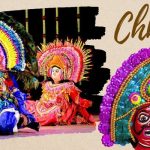