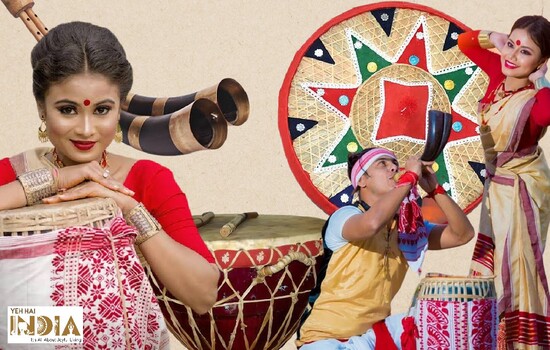 Bihu dance is the finest expression of Assamese culture.

The northeastern state of Assam is rich in fertile lands, wildlife and culture as old as the hills it is surrounded with. Bihu dance is an additional feature that attracts people towards this enchanting land.

Indians celebrate everything with music, dance and food. Bihu is not any different in that matter either.

The Bihu folk dance is a world famous dance that originated in Assam and is performed on Bihu festival and other important occasions in the region.

On this day, young men and women adorn themselves with traditional Assamese colours and dance to celebrate passion, fertility and the seasonal spirit.

Origin and History of Bihu Dance

Like many other Indian folk dance forms, the origin of Bihu is not clearly documented. However, there are records of the dance being practised among all the people of Assam’s diverse ethnicities.

There is evidence of the earliest Bihu performance in the sculptures from the districts of Darrang and Tezpur in Assam. Inscriptions from the Chutia Kingdom of the 14th century during the rule of King Lakshminaryan that depict Bihu performances in the courts during festivals can also be found.

There is another mention of it from the records of the Ahom King Rudra Singh in the year 1694 during the celebration of Rongali Bihu,one of the Bihu harvest festivals celebrated in Assam..

Recommended Story – Bihu Festival: A Coming Together Of The Harvest Celebrations Of Assam

The indigenous dance is more than an art form. It is a symbol of the diversity found in the culture of Assam. An important part of their identity, Bihu dance portrays the joy and pride with which the tribes of Moran, Sonowal, Deories, Borahis and Kacharis celebrate important days.

The dance is not just popular among the locals but enjoys worldwide acclaim as a popular North Eastern Folk dance of India.

During the Olympics of 2012, in London, professional Bihu dancers from Ranjit Gogoi’s team performed for the audience comprising if celebrities and people from all parts of the world.

During the Bihu festival, people gather around in a field or any open space to commune with their family and friends to celebrate the turn of the season along with offering thanks for the bounty given in the present and the future.

The young men and women of the community gather around in groups to play music and dance in circles or parallel rows. The men usually dance along playing musical instruments like the Dhol, buffalo Horn-Pipes, Taal, Toka, Xutuli, Gogona, Baanhi or Flutes.

The songs played for the performers to dance usually sing of love and passion as the dance is essentially a celebration of the youth, vigour and joy in one’s life.

The women start dancing slowly to the beats of the music swaying alongside, their hands moving with the palms turned outward in an inverted triangle shape.

The dance form requires women to stand together in groups and dance stepping forward and backwards with their bodies slightly bent forward at their waist.

Once they start dancing, the women gracefully open their shoulders and place their feet apart in tune to the flow of the song. This is the classic posture you see in any form of Bihu dance. In between the performance, the dancers sing melodiously together.

Gradually the men pick up the tempo and the dance intensifies with the women dancing in alternative movements.

Some versions of Bihu even include men and women holding each other and pairing up during the dance performance.

A good Bihu performance is an experience you will never forget as it not only showcases a very old art form but because it signifies the authenticity and heritage of the Assamese people.

The dancers are garbed in the traditional Assamese attires that are handwoven and hand crafted with remarkable artistry on display. The colours are traditionally chosen in vibrant colours to mimic the spirit of the art. The men dress in dhotis and gamchas.

Dhotis are long cloths that are wrapped around the waists while the gamocha is for the head. They are both gorgeously embroidered with patterns on the ends.

The women wear beautiful Mekhela Chador – the traditional Assamese attire, with a blouse underneath. Mekhela is part of the attire that covers the lower half of the body like a long skirt with pleats in the front and the Chador is the cloth that is draped across the upper body.

The clothes are usually sewn from pat silk, Muga silk or cotton. This costume is paired with elaborate decorative jewellery around their neck, wrists and ankles. Women also adorn their braided hair with colourful flowers that complement their dress.

During the period when the British ruled India, they looked down upon Bihu as they found it too crude for their tastes. It had been primarily a rural celebration till then. However, in today’s Assam, Bihu exists as a cultural symbol of the state.

It is being performed on national and global stages by trained dancers. Without a doubt, Bihu dance has become an identity of not just the tribes of Assam but of the whole state in general.

Bihu is an indigenous dance form of the state of Assam the origin of which is not certain. It began with the tribes of Moran, Sonowal, Deories, Borahis, Kacharis and others dancing Bihu to celebrate love, passion, and the turn of the seasons.

The historical records go back to the 9th century India that mentions Bihu being performed during celebrations. Young women and men come together and dance to the music from the dhol, buffalo Horn-Pipes, Taal, Toka, Xutuli, Gogona, Baanhi and Flutes and to songs that sing of love.

The dancers are dressed in the traditional attires of Assam with the dhotis and gamochas for the men and the Mekhela Chador with blouses for the women. Women also wear heavy jewellery on their necks, wrists and feet along with pretty flowers decorating their braids.

The dance form has evolved with time but the original form is still practised commonly among the performers. Bihu dance is usually performed during the 3 Bihu festivals observed in Assam and is one of the most colourful and the best folk dances of India.

With such colourful and vibrant form of dance amid the scenic locations of Assam, there’s no reason you should miss this once-in-a-lifetime opportunity to witness Bihu Dance. 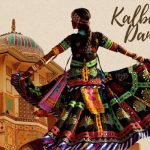