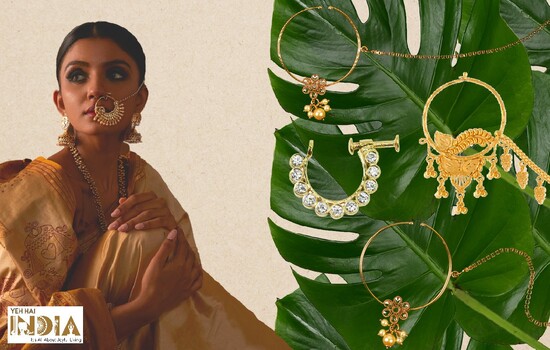 In every region of India, brides frequently wear a nose ring, or “nath,” as jewellery.

The Mughal emperors introduced this Middle Eastern trend to India in the 16th century, and the tradition of having one’s nose pierced with a ring or stud has persisted ever since it came into being.

In India, this jewellery item is mostly seen on weddings, where a bride is adorned specifically with a huge Nath that describes her as a women entering a new phase in her life, that of a married lady, according to the local traditions.

Nath is a nose stud or ring worn by brides either on the left side or both sides, and it is typically adorned with a gold chain that runs up over either side of the face and is hung over hair just above the ear to give a distinctive look.

Women prefer to hunt for different designs of gold chains that can be easily turned into a nath to match different occasions and costumes.

The majority of Hindu brides can be seen with nose rings as a means to thank Devi Parvati, the goddess of marriage. These are worn as a sign of one’s marital status as well.

This is demonstrated by the fact that in some regions of the nation, women continue to wear nose rings even after getting married as a mark of respect for the traditional values.

The nose ring has long been a sign of a bride’s virginity in Hindu customs. The bride is free to decide whether she wants to wear the ring or not on her wedding day.

If she chooses to wear it, she should have a nose ring fashioned in metals and hues that complement the lehenga-choli or saree she has previously purchased for her wedding.

The bride’s facial features and nose shape should both be taken into consideration while determining the nose ring’s size. A woman with a huge, round face, for instance, will appear great with a large nose ring.

However, it is important to remember that not every bride will look good wearing nose rings.

The fact that naths are typically linked with Hindu culture does not exclude women from other religions or cultural backgrounds from donning them. For instance, Muslim brides also frequently wear nose rings.

In numerous Indian states, the nath assumes distinct applications. An essential part of festivities and weddings, this piece of jewellery has become a global trend that signifies one’s connection with one’s native land.

The Punjabi Nath, also known as Shikarpuri Nath, is a model of beauty and opulence.

It is essentially a hoop of varying sizes that is always connected to a chain and can be fastened to your hair close to your earlobe. In comparison to other local naths, this can be a little heavier.

Women from these two states wear nathnis that are made of magnificent gold carvings, gemstones, or diamond bequests. These are exquisitely made objects that are referred to as Nathuras here.

These are modest nose rings meant for everyday use. These are occasionally linked to a hoop but feel much lighter than other types of rings.

The nath is different in the northern parts of India. The majority of the time, the women wear the nath as a studded ring with a diamond or gemstone adornment. Due to the resemblance it has with the condiment clove, this became known as ‘laung‘.

The Latkan is another well-liked nath variant in North India. This is essentially a stud and a chain bracelet with a pin or hook on one end that can be attached to the bun or hair.

Mukuthis, which are traditional nose rings shaped like a ‘swan’ or a ‘lotus’, are worn by women in Kerala and Karnataka. Ladies from Kerala also don the traditional nath known as palakka, which is frequently embellished with red stones and feature alluring patterns.

The nath is known as Pullaku in Tamil Nadu and is frequently worn with Mukuthi. The Pullaku, a prominent nose ring, is frequently used as bridal jewellery.

Gucchedar nath is the name given to the Maharashtrian nath. With pearls and diamonds inserted, it resembles a ‘cashew’ in shape. The nath has recently gained a lot of popularity in Indian movies and has evolved into a style statement.

These naths, sometimes referred to as the Nathuli, are more like family heirlooms and uphold the status quo of the households.

Married women of the local Garhwali tribe wear it, and it is typically embellished with rubies and other costly stones.

Beneficial to the Health:

In the northern regions of India, the nose ring is commonly worn on the left side of the nose. On the other hand, the ring on the right is typically worn by brides in India’s southern states.

However, ladies typically like having their noses pierced on the left side. This is due to the notion that this trend helps ease the pain and discomfort associated with childbirth.

This is because the nerves in the left side of the nose are connected to the female reproductive organs and ancient Indian medicine, or Ayurveda, promotes natural healing, piercing that side of the nose can ease pain and tension a woman goes through when giving birth to a child.

Another myth suggests that piercing a certain area of the nose can help a woman who is experiencing menstrual pain.

No traditional bridal look in is thought complete without this one magnificent jewellery item, the Nath. Therefore, it must be concluded, that ‘Nath’ is going to remain a favourite among women from different backgrounds not just for weddings but also as for representing one’s culture on different festivals and events observed by the Indians, particularly, those living in the villages.

If you want to look truly special on your wedding day, find inspiration on Nath design trends observed in different parts of India and choose the one that best suits your face shape and costume.

Also Read – Bridal Bangles of 2021: Let Your Bangles Do The Talking! 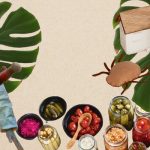 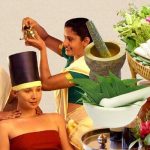