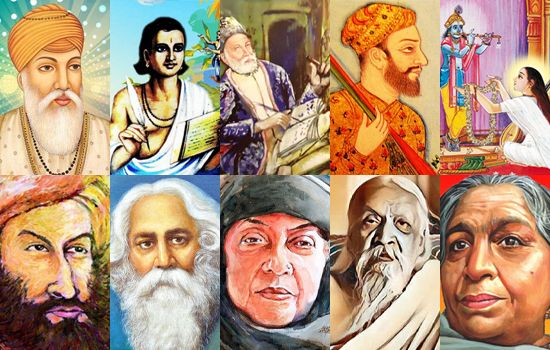 Indian Poetry has its roots dating back to the Vedic times. They were written in various languages starting in Vedic and Classical Sanskrit, Hindi, Odia, Maithili, Tamil, Telugu, Kannada, Bengali and Urdu.

Not only original Indian poetry but even poetry in foreign languages such as Persian and English had a strong and prominent influence on Indian poetry which is still a part of the Modern Indian Poetry.

The poetry since decades has reflected diverse spiritual traditions within India and many Indian Poets have penned down world famous poems through their mystical experiences.

India has historically been the land of notable poets whose exemplary work is world renowned.

Here are 10 greatest Indian poets of all times:

One of the most recognized authorities is our very own mystic poet from the 15th century, ‘Kabir’. He penned down all his poems in Hindi language and mixing some bits from various dialects including Avadhi, Braj and Bhojpuri.

His poems were a reflection of the various aspects of life and faith. Many of his poems are famously known as “Dohas”. “Kabir Ke Dohe” are very famous in India and are commonly used in day to day life to give examples.

A revered Saint, Kabir was critical of religion which existed majorly at that time especially Hinduism and Islam along with the various rituals each religion had come up with. His poems also portrayed his criticism and philosophies that showcased meaning of true devotion.

Kalidasa is one the greatest Sanskrit poets of India, he is said to be from the 5th century. Not many facts are preserved about him but it can be said that he enjoyed great popularity during his time specially within the Hindu community.

His plays and poems are primarily based on the Vedas, Puranas, the Ramayana and the Mahabharata.These form a prominent part of Indian literature till date.

Fact – Kalidasa is known as the ‘Prince of Indian Poets’ and the ‘Indian Shakespeare’.

‘Mirza Asadullah Baig Khan’ popularly known as ‘Mirza Ghalib’ is one of the most influential poets in Urdu, during the fag end of the Mughal Empire in India.

He started composing poems at the tender age of 11 and was well-versed in various languages which included Urdu, Persian, Turkish and Arabic.

Poetry works composed in Urdu and Persian by Ghalib are penned down reflecting on various subjects such as philosophies, existentialism, mysteries of life and many more.

Fact – Ghalib’s original pen name was ‘Asad’, taken from his original name. Later in his poetic career, he adopted the pen name ‘Ghalib’.

Sufi Poet, ‘Amir Khusrow’ born in 1253, is also called as the Father of Urdu Literature though most of his poetic works were in the Persian language. He being an expert in Persian poetry has been credited to create ‘qawwali’ style in his song writing.

He even introduced the ‘Ghazals’ in the Indian subcontinent. His poetry has been moulded into different forms and with many variations taking the shape of ghazals, masnavi, qata, rubai – all of these then later became an integral part of Urdu Poetry.

Famous Works – His works include:

Fact – As a composer, Khusrow used the local dialects of Khadi Bol, Braj Bhasha and Hindawi, as well as court languages like, Persian, Arabic and Turkish.

Born in 1498, Mirabai’s mystic poetry is remembered even today as her work mostly portrayed her devotion towards Lord Krishna. While recollecting facts from the old times, she has been known as a highly influential figure in poetry traditions, though there are no surviving original manuscripts penned by her.

Her poems showed different paths on divinity, mysticism and love which is considered being highly influential and prominent in setting a tone or a poetic flow in the Indian literature.

Fact – Mirabai was born a princess, granddaughter of Rao Dudaji – the third son of Rao Jodhaji, who established kingdom of Rathod Dynasty in Rajasthan.

Born in 1722 in Agra, Mir Taqi Mir was an Urdu poet of the 18th century during the Mughal Rule. He entered the world of Urdu poetry when it was in its initial stages. He is also the pioneer of the formation of the Urdu language, that shows not only poetry but he was the developer of the language also.

His work is based on various themes such as love and spirituality and also based on his personal life tragedies including untimely deaths of his family members.

Famous Works – Few of his sad poetry works are :

Fact – Mir Taqi Mir is remembered as Khuda-e-Sukhan which means ‘God of Poetry’.

From the Modern Indian Literature, the most recognized and influential figure is the Nobel Prize winner in Literature, Rabindranath Tagore.

He wrote poetry primarily in Bengali. He was more than a poet; he was a composer of highly revered novels, dramas, short stories and even paintings. He is also known to be of significance in modernising Bengali Art.

His work explores a variety of topics starting from spiritualism to social realities.

Fact – Rabindranath Tagore was not only first Asian to win the Nobel Peace prize, but also the first Non-European to mark his significance in the field of literature.

Born in 1934 in Kerala, Kamala Surayya is one of the most bold, fearless and among the most influential figures in Indian-English language poetry.

She is popularly known by her pen-name ‘Madhavikutty’ and has written on many issues including love, betrayal, female sexuality and politics.

She was known to portray the women in her poems as human; with desires, pain and emotions just like men. Her writing consisted of vivid descriptions of menstruation, puberty, love, physical intimacy and much more.

Famous Works – Few of her famous poems are :

Fact – Kamala Surayya earned the label of ‘The Mother of Modern English Poetry’.

Sri Aurobindo Ghosh was not only an important modern poet but also a highly influential philosopher, yogi, guru and even political figure. He became a spiritual reformer introducing his visions on human progress and spiritual evolution.

His poetry was based on themes of spirituality and mortality. He was involved in translations of Vedas, Upanishads and the Bhagavad Geeta.

Known as the ‘Nightingale of India’, Sarojini Naidu is not only a highly influential poet in Modern Indian but was also a highly celebrated freedom fighter who served as the President of the Indian National Congress and her contributions to India’s independence against the British.

She has known to set a tone for Modern Indian Literary traditions and has been a very prominent personality in the field of poetry.

Her work revolves around the themes such as love, death, patriotism, among others.

Famous Works – Few of her famous poems are :

Sharmila Feroz comes from a military household where travel has been a prominent part of her life and penning down those experiences, a passion that pushed her into the world of writing.
Her dream is to keep exploring different writing avenues and keep writing majorly about the good things that exists in the world.

There is no one in the list to match Allama Iqbal.The greatest poet of Indian subcontinent ever.

The writer has mentioned very few number of poems by each poet. A list of their collection of poems would have been better. Eg. Kamala Das (Surayya) has published five collections of poems. In all she has to her credit more than 200 poems. She wrote poems in English only. But she is a famous short story writer in Malayalam. However, the article is helpful for those who are not introduced yet to Indian literature, both in vernaculars and in English.

I’m shocked that there is no allama iqbal’s name in top India’s poets. Why the writer of this article didn’t mention Allama Iqbal’s name?
In my opinion Iqbal is a greatest poet after tulsidas and Ghalib.

Such articles are generally written to promote some one for some reason, so donot get disturbed.

Its really fulfills ones desire of knowing about poets.

Hoe i can devlop prolific writing as expertise in writing with lots of immense knowledge of literature.how much i needvto study and for spirituality where from need to learn.

Thanks for this compilation

Don’t you know about Thiruvalluvar, Kambar and Bharathi leave alone a number of spiritual poets. This is the main reason for Tamil Nationalism. When you don’t look at the best, we don’t want to associate with yours.

Although in the introduction different Indian languages were mentioned, the poets selected shows a bias. Most of us ignorant that Tamil predates Sanskrit. By centuries. There were seven epics written in Tamil, during the ‘Sangam’ period. This epoch derives its name from the word Sangh, which refers to a collective of poets. Each ‘sangh’ had over a hundred poets. The excellence of their poetry can be savoured even now. At least look into the work of Illango Adigal. Since you mentioned the Vedas, the ancestry of this writer will not balk you. However, if you wish to look at the work of less ancient Tamil poets, the literary luminaries, both men and women, of later centuries, have left behind treasures that merit notice.

The most comic and farce analysis! Kabir is Great Human, Great poet, no doubt, but not above Kalidasa, Magha, Bana, Mayura and the like! So is the case with Khusro and Ghalib! At best it could be your personal choice! Shows you read very little about hundreds of great writers in so many languages spoken in India. My morning is a humorous morning. Had a good laugh! Thank You!

It is Nobel prize not Noble what you have written here.

Photo of Ghalib beside the lines of Amir Khusrow.

PLEASE GIVE THE POEMS OF दिनकर ,MAITHILI SHARAN GUPTA,MAKHAN LAL CHATURVEDI,AND OTHER NATIONALISTIC POET LIKE SAHAJ FROM HIS BOOK “WATAN KE NAAM.”

Not a good selection. What about Tulsi, Surdas in the mediaeval era and Maithili Sharan Gupt, Jaishankar Prasad, Firaq, Mahadevi Verma and Nirala – to name a few.

Dear Satyendra, we thank you for your suggestion. We will surely come up with some patriotic poetry.Stay tuned to Yeh Hai India and keep the suggestions and feedback coming.
Thanks
Team YHI

Excellent l WANT TO PUBLISH MY OWN HINDI POETRY BOOK. PLEASE HELP ME. 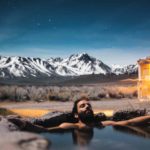