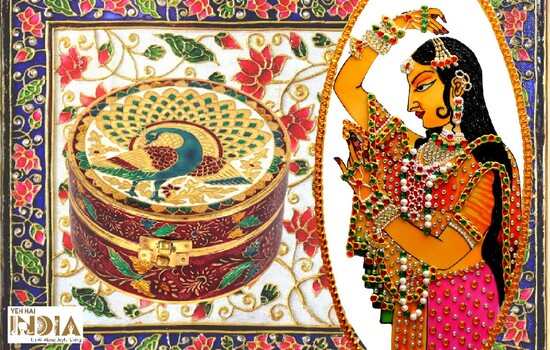 Meenakari or Enamelling exists as the most thriving artform due to its striking blend of colours and intricate patterns.

The desire to immortalise oneself through art is one of the oldest known tenets of humanity. It is evidenced in cave paintings, portraits of kings, and sculptures detailing stories of war and victory.

Art as a medium for self-expression is very important, art prevails where words fail. Art tells stories, communicates messages, and provokes emotion all without speaking a single word. Art can be ceremonial, narrative, ornamental and religious.

Throughout history, distinct styles of art have emerged from Baroque to Pointillism. This art has travelled overseas and on continents to reach various communities and take on their characteristics.

One such style is Meenakari that arrived in India in the 17th century and quickly acquired fame within the states of Rajasthan and Gujarat.

History And Origin Of Meenakari Art

The history of Meenakaring paintings is quite an interesting one. The word Meenakari is a blend of two Persian words. The word ‘Meena’ is a feminine form of the word Minu which means ‘heaven‘. In India, the word has come to be a direct translation for the term enamelling.

On the other hand, the word ‘Kari’ refers to the placement of something onto something else. Altogether, Meenakari art means to place paradise onto the object which is being painted.

It is practised mainly in the South Asian countries of Iran, Afghanistan, Pakistan and India although its influence can be found all over the globe.

Although, the process of painting metal for ornamental reasons can be found in Iran from the Parthian period onwards, the advent of Meenakari art took place in the 15th century during the rule of the Safavid dynasty.

They were commissioned by holy shrines, the royal family and commoners alike. In Iran, the main centres of Meenakari art are Isfahan and Fars.

Within two decades, the number of Meenakari artists in the city of Isfahan had grown from twenty to five hundred as the demand increased exponentially in the mid-20th century. Most of them learnt their craft from Šokr-Allāh Ṣaniʿzāda who set a standard for the art form that is still upheld today.

The Process And Designs of Meenakari Painting

Meenakari art bypasses the conventional canvases for art and opts to paint metal and ceramic through enamelling in order to add colour to their surfaces which is difficult under ordinary circumstances. The material is engraved intricately and then filled with powdered colours.

This coloured powder is then allowed to settle onto the surface through intense heat that can go up to 850° Celsius. This causes the powder to melt and form a thin, glossy coating over the object. This coating is smooth and durable.

Each colour needs to be heated individually, hence the most heat resistant colours are added first. The substrate that is painted is referred to as ‘chitras’ and cleaned afterwards with a mixture of tamarind and lime.

Similar to Mandala art, Meenakari art involves creating intricate designs, generally in geometric shapes in vivid colours. Meenakari painting is applied to utensils such as serving dishes and containers, as well as display furniture such as vases and chandeliers, and jewellery.

Traditionally, the designs are in light blue, red, yellow or green colours. Peacock motifs, floral patterns in the Mughal style, fish and portraits of Gods and mythical figures are all too common within this art style.

Meenakari is a difficult art style as multiple artisans specializing in different things are required for each step of the process from designers, known as chitras, who draw up the initial art to the polishers who provide the art with its signature shine.

Traditionally, gold was used in the production of Meenakari paintings as it holds the enamel best and shows off the vivid colours to the best of their advantage. That is why, it is considered the zenith of bridal jewellery in India.

Silver is the most commonly used metal in Meenakari although it came into use much later, as it is both cheaper than gold and a fairly good substrate for the enamel.

However, it can only hold the colours yellow, green and blue whereas gold can hold any colours. Silver is chiefly used to create utensils, furniture and art pieces as opposed to jewellery which is made mainly in gold.

In Iran, copper and silver are the most commonly used metals. White metal, a tin-based alloy, is growing in popularity in the Meenakari community as it is very affordable. The Gold Control Act of 1968 also forced Meenakari artists in India to look for other substrates to use in Meenakari paintings.

Evolution Of Meenakari Art in India

In India, Meenakari art form was introduced by the Mughals who shared a deep bonding with the Rajputs. Due to the amicable relationship between them and the Rajputs, the artform gained prominence in Rajasthan and Gujarat.

Raja Man Singh of Amber brought Persian Meenakari artists from Lahore to Rajasthan and the art form flourished there, with Jaipur becoming the centre for Meenakari art and even developing its own Champlevé style which can be identified by its deep red colour and is in high demand all over the world.

Since then the art form has only grown and developed to be lovelier and more elaborate than ever.

The Meenakari paintings were at the time a symbol of Rajputana culture, conveying their integrity and aristocracy. They were often embellished further with precious stones like diamonds.

Eventually, a blend of the age-old Kundan style of jewellery and Meenakari art emerged in the form of Kundan Meena jewellery, precious stones were embedded in coloured glass.

For the royals, the crushed minerals were often made of semi-precious stones whereas simple coloured glass was reserved for common people.

The Meenakari art in India can be commonly divided into two kinds: ‘ek rang khula’ style and the ‘panchrangi meena’ style. In the former, only a single colour is used throughout the art whereas, in the latter, five colours are used: generally white, light blue, navy blue, blood red and fresh forest greens.

They are always vibrant colours that can bring a sharp contrast with gold and silver additions.

Just as Meenakari has exerted its influence over India, every single place in India has influenced Meenakari art in turn. Gulabi Meena is another kind of Meenakari painting prominently found in Varanasi. It uses enamel derived from its namesake, the rose.

The pink enamel is generally used to paint flowers against a background painted with warm, earthly colours in order to create a contrast.

In Lucknow, blue and green Meenakari over silver is most popular whereas, in Delhi, Banaras and Jaipur, enamelling over gold can be found. Pratapgarh boasts of its glass Meenakari, a delightful creation that deserves every bit of your attention.

Meenakari Sarees can also be found in Banaras with Resham threads of different colours weaved in and out of the material.

Meenakari paintings are an excellent example of the way Indian culture absorbs foreign influences and gives them an Indian flavour.

Meenakari was a strange and foreign art form in the 17th century but we adapted quickly and now there are multiple centres of Meenakari art in India with world-renowned artisans.

But even so, it is becoming more difficult day by day to create Meenakari art as the specialists needed for each stage are becoming rare. It falls on us to keep this beautiful art form alive and thriving in India for centuries to come.

Meenakari Paintings do tell a tale of the many colours of Mughal art and it’s influences on Indian Art and craft. 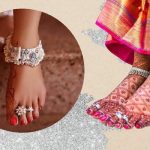 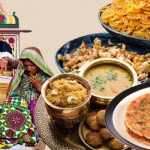